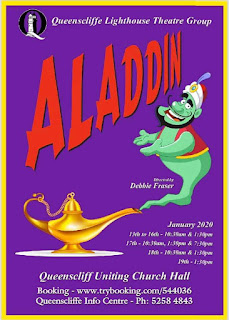 What do you do with an old dusty lamp? Polish it of course.

But what happens when a larger than life, magical Genie appears?

Mayhem and magic, with lots of laughs, singing and mischief.

A traditional pantomime where the lead character, Aladdin is played by a girl and we are delighted to introduce newcomer Millana Anello in that pivotal role.

Playing the “dame”, Widow Twankey is veteran actor, Ian Rooney, who brings a wealth of experience to this rather flamboyant character.

Joining them as the dark and mysterious stranger Abanazzar, is another professional actor and local identity Matthew King. Matthew last appeared as Captain Hook in the adventures of Peter Pan in 2018.

Sue Rawkins shows her versatility as both the Sorceress “Darkana”and the Empress.

Karina Whytcross plays Princess Baldroubador and others include Guy Wingrave as Wishy Washy, Jess Dolley as Typhoo the dancing panda as well as Colby McCallum & Georgia Archdall as Ping and Pong, River Madden as the Ring Genie, Matthew Tripodi, as the Genie of the Lamp, Emilia Kurak, as the Grand Wazier, Luke McKinnon, Georgia Slaymaker & Delanee Collins.

Aladdin has been adapted from the original tale by director Debbie Fraser and is set in China. This show promises to have something for the whole family.

Shows are twice daily at the Queenscliff Uniting Church Hall.
10.30am and 1.30pm from Monday 13th to Saturday 18th with an evening show on Friday 17th and one show on Sunday 19th at 1.30pm
Bookings are through trybooking or the Queenscliff Information Centre. 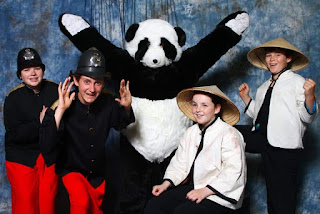 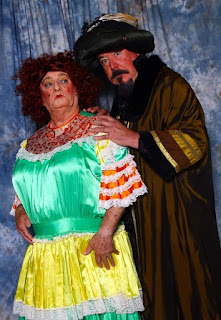 Pictures by Dean Bateup
Posted by QLTG at 5:45 PM