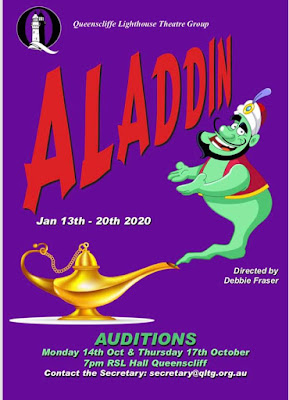 Queenscliffe Lighthouse Theatre Group
are holding auditions for their next production

Rehearsals to commence as soon as casting is complete
and anticipated rehearsal times to be
Monday and Thursday evenings 7.00-9.00pm
and some Sundays (time to suit cast).

Rehearsals will take place at the Queenscliff RSL Hall.

Four ensemble members. Must be aged 10 or above.
Male or female. Singing and dancing.

Audition Requirements
Prepare a short monologue and about 30 bars of a song from a musical.
Bring recorded backing.