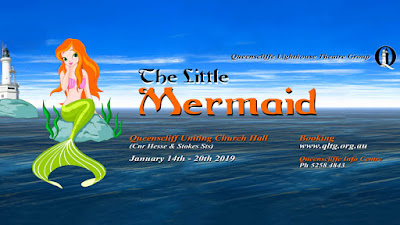 Tickets are now on sale for the Queenscliffe Lighthouse Theatre Group's January school holiday production of The Little Mermaid.

The Little Mermaid is one of Hans Christian Andersen’s most well known stories, but unlike the original story, this one has a happy ending!

The Queenscliffe Lighthouse Theatre Group are proud to present this wonderful family show during January. After a sell out season of Peter Pan last year, we have once again secured the services of Debbie Fraser to direct. With a mostly local cast from Queenscliff, Pt Lonsdale and Ocean Grove, it promises to be another highlight of the summer holiday season.

While everyone is familiar with the Disney version with Arial and her friends Flounder and Sebastian the crab, our Mermaid's name is Nieela, which translates to Sea Princess, and her brave companion is Clem the Clam.

It all begins on the day the youngest Princess Mermaid is celebrating her fifteenth birthday, and is granted permission by her father, King Neptune, to swim to the surface of the sea. Wearing a beautiful crown fashioned by her grandmother and accompanied by her close friend Clem Clam, she encounters a sailing ship and recognises and falls madly in love with young Prince Frederick.

But the evil Sea Witch and her two nasty side kicks, Rip Tide and Zip Tide, interfere. Using her magical powers The Sea Witch conjures up a terrible storm. The Captain and his crew jump overboard, but young Prince Frederick is thrown from the ship and almost drowns. Nieela swims to his rescue and brings him to shore.  Once Frederick recovers he spots a young peasant girl Georgina walking along the shoreline who he unfortunately believes to be his saviour. The Prince promises to marry her the next day in honour of saving his life. Meanwhile Nieela seeks the assistance of the Sea Witch, to drink of a magic potion so that she can lose her fish tail and stay permanently on the land to pursue the Prince.

Nieela is tricked into trading her voice for the potion and now cannot explain to Prince Frederick the truth of the rescue. What will happen to make the Prince realise his mistake? Does the Sea Witch take control of the undersea kingdom? To find out you will need to come and see the show!