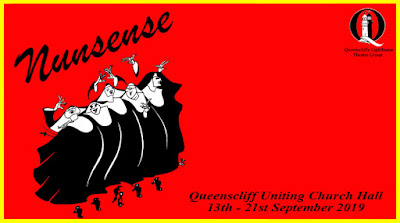 To be presented in the Queenscliff Uniting Church Hall
September 13th - 21st  2019 .

Rehearsals are under way following on from the company's recent success of It's My Party (and I'll Die If I Want To) at the 360Q and as part of the Queenscliff Low Light Festival.
Nunsense is an hilarious musical comedy in the traditional Broadway style.

The Little Sisters of Hoboken have decided to put on a “Show” to raise money to bury sisters accidentally poisoned by the convent cook, Sister Julia (Child of God). Updated with new jokes, additional lyrics, two new arrangements, and a brand new song as well as tap dancing and lots of shenanigans.

The cast includes Jennie Roles as Sister Mary Regina, a feisty Mother Superior who can't resist the spotlight. Jennie has years of experience as a musical comedy performer with several awards and a list of credits too long to mention here, but last year directed the very popular “Dinkum Assorted”.

Carol Fogg will delight as Sister Mary Hubert, the mistress of Novices. The second in command. Carol has performed with most theatre companies in the Geelong region as well as guest vocalist. Carol was last seen in “Dinkum Assorted”.

QLTG welcomes newcomers to the company, Jess Dolley as Sister Robert Anne, the street wise school teacher and Tamasyn Shannon as the very sweet Sister Mary Leo, who has the desire of being the first ever Nun ballerina.

Lastly Sister Mary Amnesia, who has lost her memory after a crucifix fell on her head is played by Lisa Jones, who is also assisting with vocal direction and previously has worked with the company as stage manager.

Bookings will be opening soon on Trybooking or through the QLTG website.