Enjoy a delicious two course meal and a laugh out loud show with Queenscliffe Lighthouse Theatre Group's production of Elizabeth Coleman's hilarious comedy It's My Party (And I'll Die If I Want To) at the 360Q Restaurant from June 7-15 as part of the Low Light Queenscliff festival.


Join us for an hilarious and biting slice of family life laid bare by the imminent passing of the “bombastic but adorable” patriarch, Ron Patterson.

Playwright, Elizabeth Coleman (Secret Bridesmaids Business) is one of Australia's finest writers. Her observations of a “typical” Australian family and all that comes with sibling rivalry is hysterically captured in her endearing but flawed characters and her wincingly funny one liners.

It's My Party (And I'll Die If I Want To) is presented by Queenscliffe Lighthouse Theatre Group in collaboration with 360Q as part of the Low Light Queenscliff Festival. 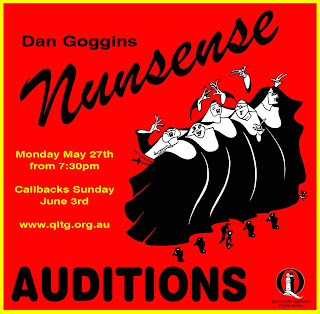 Rehearsals to commence as soon as casting is complete and anticipated rehearsal times to be Monday and Thursday evenings 7.30-10.00pm and Sunday (time to suit cast).

Rehearsals will take place at the Queenscliff RSL Hall.

Nunsense is an hilarious musical comedy in the traditional Broadway style.
The show is a fund-raiser put on by the Little Sisters of Hoboken to raise money to bury sisters accidentally poisoned by the convent cook, Sister Julia (Child of God).
Updated with new jokes, additional lyrics, two new arrangements, and a brand new song

Casting – Plus an ensemble of 4-6 females who sing and “dance”.

SISTER MARY HUBERT, MISTRESS OF NOVICES:
Female, mid 50’s (Range: G3-F5) The second in command, she is always competing with the Mother Superior.

SISTER MARY AMNESIA:
Female, Late 30’s (Range: Db4-C6) This nun lost her memory after a crucifix fell on her head. She is very sweet.

SISTER MARY LEO:
Female, mid20's/Mid 30’s (Range: G#3-G5) The novice, who has entered the convent with the firm desire to become the first nun ballerina.

Requirements
Prepare a short monologue and about 30 bars of a song from a musical. Bring recorded backing.